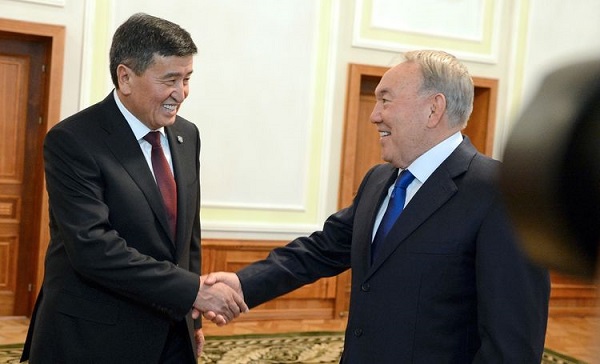 Within an official visit to Belarus, President of Kazakhstan Nursultan Nazarbayev held a bilateral meeting with his Kyrgyz counterpart Sooronbai Zheenbekov at the request of the Kyrgyz side, Kazinform correspondent reports.

"Firstly, I sincerely congratulated Sooronbai Sharipovich on the election victory. Secondly, we agreed to restore all fraternal ties between the two countries. It is in the interests of both peoples. We all know why such border situation happened," Nursultan Nazarbayev told the reporters after the meeting.

The Head of State said that within the next day or two, the delegation of the Kyrgyz Government will arrive in Kazakhstan in order to discuss the roadmap aimed at solving the issues that have arisen between the two countries.

Nursultan Nazarbayev also highlighted that upon that, the border in Korday will be temporarily opened as was requested by the Kyrgyz President. Both sides will establish control - three people representing Kazakhstan, Kyrgyzstan, and the Eurasian Economic Union will inspect each cargo, but they will let cargoes pass. The same control will be set on the Chinese border.

Besides, the President said he invited Sooronbai Zheenbekov to pay an official visit to Kazakhstan so that to make the things better between the two countries.

For his part, the President of Kyrgyzstan stressed that he wishes the very best to fraternal Kazakhstan.

"We discussed the current problems and made the decision. The governments of the two countries will make up the roadmap. Following that, many issues will be solved. We decided that we can not do without the border control by the EAEU, Kazakhstan, and Kyrgyzstan. I asked, and [they] opened the border for us. I have assumed the responsibility. There are many issues, we will solve them together. Thank you, Nursultan Abishevich," said Sooronbai Zheenbekov.

Presidents of Kyrgyzstan and Kazakhstan during the meeting in Minsk agreed on triple control over the Kyrgyz-Kazakh border.

President Nursultan Nazarbayev said it is necessary to adopt the road map. According to him, the working groups will meet soon to discuss the road map. The border will be temporarily opened until the road map is adopted.

The Presidents also reached an agreement to establish control on the border from Kazakhstan, Kyrgyzstan and the EAEU.

"The same control will be conducted on the border with China," Nazarbayev added.

Jeenbekov said that all existing issues have been discussed at the meeting and they came to a common decision.

“We have agreed to settle all bilateral cooperation issues during this visit,” Nursultan Nazarbayev said.

The two discussed further cooperation, including the issue of regulation of the situation on Kyrgyz-Kazakh border.

Nazarbayev congratulated Jeenbekov on presidential election win and noted that the friendly relations between the two countries will be strengthened.

In terms of the situation on the border, the Kazakh President stressed the importance of adoption of a road map, which is being developed by the countries today. "The working groups will meet soon," he noted.

The leaders also agreed on establishment of control on the border from Kazakhstan, Kyrgyzstan and EAEU.

Jeenbekov thanked Nazarbayev for congratulations and wished the Kazakh President good health and prosperity to the Kazakh people.

"We spoke about all existing problems and came to the common decision. There is a road map, the Governments of two countries are working and we will finish the work in this direction within December. We will establish a joint control on the border. All issues of cooperation will be resolved," Jeenbekov told journalists.