Sooronbai Jeenbekov: no need for early dissolution of Parliament﻿ 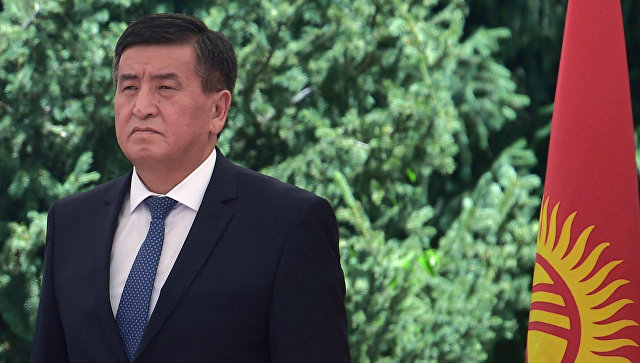 The president-elect of Kyrgyzstan, Sooronbay Jeenbekov, in an interview with RIA Novosti, said that he considers an early dissolution and the election of a new parliament inexpedient.

«So far, there are no signs of a political crisis that could provoke dissolution of the Parliament. There must be reasons to hold new parliamentary elections,» Sooronbai Jeenbekov said.

He also commented on a number of amendments to the Constitution that came into force in December, which reduced the powers of the president, and answered the question whether he would easily communicate with the Prime Minister Sapar Isakov.

«The president has sufficient authority under the Constitution. No one, except for the head of state, can perform the functions of coordinating the interaction of branches of state power without compromising their independence and self-reliance. The amendments are aimed at ensuring a strong president in the country, a strong parliament, a more stable government, and an independent and more responsible judicial system,» Sooronbai Jeenbekov said.

«We have a strong team. There are many young professionals in the new government of Kyrgyzstan, and they are keen on serious reforms. Our team knows how to work. When I was prime minister, we have managed to achieve economic growth of almost 12 percent,» he added.

“I think we will work in the same successful way with Sapar Isakov as one single team. The young government needs strong support. If the president is the guarantor of reforms, the prime minister should become their driving force,” Jeenbekov observed.

Elections of the new president of Kyrgyzstan were held on October 15. Candidate from the party in power and ex-prime minister Jeenbekov scored 54.22 percent of the votes. The inauguration of the new head of state is scheduled for November 24.

Reported by Anastasia Bengard for 24.kg.

Recent news
Starting from 2021, all imported and produced energy devices in Kyrgyzstan to undergo mandatory energy efficiency certification
Kyrgyz Ministry of Transport determines the winner of the tender for electronic transport control for 5.3 million som
Kyrgyz railways transmit information on the accounting of goods through the state border of Kyrgyzstan online
Kyrgyzaltyn’s profit in 2019 amounts to 286.5 million som
State Committee for Industry, Energy and Subsoil Use of Kyrgyzstan earns $627 thousand at auctions of deposits
Partner news